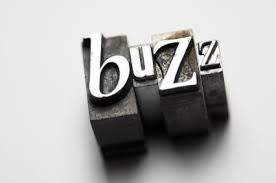 Business Buzzwords are a double-edged sword. They cut both ways, can be good, bad, or ugly. Buzzwords and buzzphrases are everywhere—so much so that we don’t even notice them. Unfortunately, buzzwords are rarely used to great effect.

Here are some great pointers to help you avoid the buzzword trap and its ill effects on you and your business.

What’s a buzzword? A word that is “popular” or “trendy” or “hip” or “stylish” and usually overused. The second edition of Random House Webster’s Unabridged Dictionary (2005) defines buzzword as “a word or phrase, often sounding authoritative or technical, that is a vogue term in a particular profession, field of study, popular culture, etc.” A buzzword is not a “term of art,” which is something quite different­ (a word or phrase that has a precise, restricted or specialized meaning within a particular field or profession, like “public domain”).

A few common examples of buzzwords appear below (followed by the number of times each word appeared on Twitter in just 30 days (Feb. 6 – Mar. 8, 2015):

The few listed here illustrate that countless others abound in business prose. Quickly scan the list and it’s apparent these words and phrases can actually be quite useful­—they’re widely used and considered normal. Alas, they’re still buzzwords. Through overuse they’ve become an ingrained part of our vernacular.

I think buzzwords are too common in business writing, and get the sense writers use them thinking little of it—by default rather than with purposeful intention. Buzzwords enter our minds reflexively and are rarely reconsidered. They’re used as a substitute for original thought to allow the writer to quickly impress others as “informed,” or quickly make a point at a generic level.

I don’t dislike buzzwords. They can be useful. What I dislike is their casual or thoughtless overuse—which is usually how they hit me—and what this betrays about the writer. Many fall into the trap of rapid-fire buzzword usage and end up attempting to be relevant without adding value (and looking a little thick).

To be clear, buzzwords can be appropriate in business writing, but they’re more often a cheap, ambiguous substitute for real thinking. Buzzwords are used as a crutch—a sign of lazy writing. It’s often a parrot syndrome in which the writer merely repeats what others say, knowing that readers will “get” a point, but not caring if they really understand. Buzzword overuse becomes an echo chamber—everyone sounds and thinks the same.

Revealing a particular lack of original thought, buzzwords ride on others’ coattails. Using buzzwords not only doesn’t require much thought, it short circuits the reader’s thought, rather than stimulating it (which, I recognize, is sometimes suitably intended).

Knowing When to Use or Avoid Business Buzzwords

It’s tempting to use buzzwords as shortcuts. But, be aware of when they work and when they don’t. When they enhance, and when they detract. Don’t just assume that a buzzword is always OK because you see others in your circles using it. Think it through. Don’t over use buzzwords.

Sometimes buzzwords become so ingrained in the business culture that they must be used to speak clearly. They have in many instances become jargon that is part of our everyday accepted business language. The trick is to discern which buzzwords are necessary and appropriate to effective communication, versus which are overused, boring, tired, or come off as window dressing.

Buzzwords have usually drifted far from their original meaning, and as they drift they lose their precision. The more contexts they’re used in, the less they mean. Is your use of a word giving it a precise meaning? Or an empty meaning? When precision is important, buzzwords are probably not a good idea.

The risk with deploying overused buzzwords is that they are often inapt or ambiguous—because the word is so overused generally, the meaning in any particular use is diluted. Buzzwords don’t mean the same thing to all people. Because they’re so overused, they mean too much. When you use buzzwords, you tend to assume the reader knows what you mean—but the buzzword is so general that your clarity is compromised.

How to Tell if a Business Buzzword is Useful

One way to figure out if buzzwords are overused or considered out-of-style is to do a quick online search for the terms “top business buzzwords to avoid” or “worst business buzzwords.” A scan of the results quickly gives you a good idea of whether to avoid using the term.

To avoid committing buzzword abuse, ask yourself these questions:

Of course, if your business audience expects to hear buzzwords or needs them to make sense of your ideas, or revels in their use (and there are audiences like this), then have at it. In fact, if you really want to rev them up, find a few buzzword resources online and pepper away. You can even find buzzword generators!

Seriously, sometimes use of buzzwords can be important if they are particularly apt and actually get your point across well for the audience you’re writing for. Using the right buzzwords may in some situations lead an audience to sense that you know the topic and relate to them. In some business environments use of the right buzzwords is central to climbing the corporate ladder. But, even this requires careful, judicious usage.

Avoiding overused or inapt buzzwords helps you create presentations that are fresh and interesting, instead of ho-hum and just a repeat of what your audience is already very tired of hearing (yawn).

Don’t be a lazy writer. Be smart about how and when buzzwords help you and your audience.